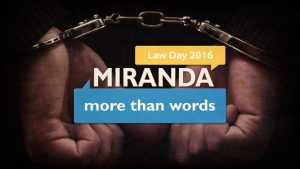 Since the Dwight D. Eisenhower administration, May 1 every year has been Law Day in the United States.

Some may notice that Law Day falls on the same day as May Day, which was c0-opted some years ago in a few countries by socialists and Communists into a holiday celebrating workers. Seeing how the former Soviet Union just loved using May Day as a time for massive demonstrations and parades, it is no wonder that President Eisenhower decided in 1958 to designate May 1st as, well, something other than May Day.

So, Law Day has emerged as a time to recognize the importance of law in society. While (let’s be honest) it’s not widely celebrated in the United States, some lawyers do make a big deal out of it.

This year, the American Bar Association has decided to use Law Day to celebrate the 1966 U.S. Supreme Court case of Miranda v. Arizona. That’s the one that gave rise to the Miranda warning which requires law enforcement officials to inform people they are arresting that they have the right to remain silent, to be represented by an attorney, etc. If you need a good overview of the famed Miranda warning, just click here. It’s worth noting that this year marks the 50th anniversary of Miranda, which is one of the touchstone cases in criminal law.

Some bar associations and such have programs highlighting Law Day, but you’ll not find just a whole lot of activity in Arkansas. Legal Aid of Arkansas is sponsoring 10k and 5k runs in Jonesboro on May 7 and is making a big deal out of the day in general. Also, the Pulaski County Bar Association is kicking off its Law Day celebration on May 2. There may be some more local activities going on throughout the state, so check with your local bar associations and find out if anything is going on to commemorate the holiday.

As Law Day falls this year on a Sunday, you’ll find a lot of legal organizations observing the holiday on May 2 or dedicating a whole week to it.