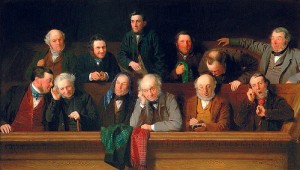 It is a popular misconception that attorneys are automatically excluded from jury duty.

That’s not the case at all. Having a look at Arkansas Code Annotated §16-31-101 and its subsequent passages shows that all one has to do to quality for jury duty is be registered to vote in the state of Arkansas or, in some cases, simply hold a driver’s license or state issued identification card.

The only way to get out of jury duty, seemingly, is to have a dire family emergency, be unable to speak or understand the English language, be a felon, be of bad character (insert lawyer joke here), be biased toward one side or the other, etc. See A.C.A. §16-31-102 for a full list things that can lead to disqualification to serve – there’s nothing in there excluding attorneys from jury duty.

Sure, an attorney might be able to argue that he or she should be disqualified because of “strong feelings” about a particular case that bias the ability to render a fair verdict, but lawyers should actually look forward to serving on juries.

Why? I well remember an experience during moot court back in law school. Essentially, we were all divided into teams of two and directed to represent either the plaintiff or defendant in a mock trial. The fellow I was partnered with agreed with me that we had put together a brilliant defense for our client and presented it with confidence in front of the jury at our mock trial.

The most positive comment I received about my performance in the jurors’ evaluations was “nice suit.”

I learned a couple of things from that experience. For one thing, going to law school doesn’t automatically mean a student will learn to argue cases in front of a jury well. For another, those arguments we think are downright brilliant may come across as unimpressive or downright idiotic to jurors.

That being the case, an attorney would do well to serve on a jury so as to understand what impresses jurors and what doesn’t. Most of us lawyers don’t wind up in front of juries that often, so it isn’t much of a stretch to assume that we can use as much insight into what jurors like and don’t like as we can get.

When approached with that mindset, then, jury duty can be viewed as more of an opportunity than an inconvenience. I still haven’t served on a jury, but I am hopeful.

This column was authored by Ethan C. Nobles and originally appeared in the Aug. 4, 2015, edition of the Daily Record in Little Rock.