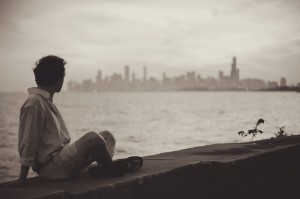 Back in 1999 when I decided to shut down my law office in Fayetteville and see what other opportunities might be available, the common wisdom was that the days of the solo practitioner were coming to an end.

The logic, at the time, was that most work for attorneys was being sucked up by large firms and the ever increasing legions of government lawyers. Having come back to the legal profession, I can’t help but notice that things haven’t changed that much. People are still predicting that the days of the solo practice are drawing to a close. Such talk seems to have picked up in the current, sluggish economic environment.

I thought it might be a good idea to give one of the happiest attorneys I know – David Bailey of the Bailey Law Firm in Siloam Springs – and ask him how things have been going for the past few years. Bailey has been a solo practitioner for18 years, and he says he wouldn’t consider doing anything else.

Is he getting rich in his one-man office? No, but Bailey said he has been able to make a comfortable living and has enjoyed the heck out of the freedom his career choice has provided him. He doesn’t work 70 hours a week, has the ability to pick and choose his own cases, doesn’t have to split legal fees with other attorneys and can pretty well schedule vacations and time with his wife as time (and money) allows.

“I make a solid, middle class living,” he said. “If that’s enough money to make you happy, then you’ll do fine. … Could I have gone a different route and made more money? Possibly, but there’s the quality of life issue to consider.”

Bailey will be the first to admit that building his own firm wasn’t easy. Instead of having cases assigned to him, he had to go out and find clients on his own. A regular, predictable salary? Bailey certainly doesn’t have that. When he is own vacation, there’s not another lawyer down the hall to cover for him. His job doesn’t come with benefits unless he provides them himself and taxes are higher. Also, he’s had to provide the computers, law libraries, forms and all those other tools that are essential to practicing law – items that are usually made available to attorneys who take jobs working for someone else.

Still, Bailey said the advantages outweigh the disadvantages, but he will be the first to admit that a solo practice isn’t for everyone. Some people are just more comfortable going to work in an established office full of lawyers who can mentor people getting into the business, and there’s not a thing wrong with that.

Regardless, Bailey says the notion that the days of the solo practitioner are numbered is hogwash. Going into business for yourself can be a tough way for an attorney to make a living, but lawyers who choose to do that can still be successful and those who have considered going solo shouldn’t be overly concerned they are putting together a business model that is ultimately doomed.

This column was authored by Ethan C. Nobles and originally appeared in the July 29, 2014, edition of the Daily Record in Little Rock.