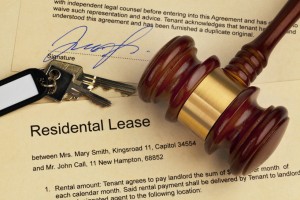 There are times when good column topics just show up at random.

The notice to quit is usually required as, most of the time, tenants are evicted because they haven’t paid rent. There are other actions that give a landlord the right to file an unlawful detainer action, but the most common reason one is filed is because a tenant has refused to pay rent.

Arkansas Code Annotated §18-60-304(3) tells us that a tenant is guilty of unlawful detainer if he or she fails to pay rent when due and fails to turn over the property to the landlord within three days of being served with a notice to quit.

An unlawful detainer complaint, of course, is more commonly known as an eviction notice and it cannot be started until after a notice of quit has been served on the tenant. With any luck, a tenant who is behind on his or her rent will leave the premises within three days of being served with the notice to quit – if not, then the unlawful detainer action can be started and the courts will determine whether the tenant should be removed.

So, what is a notice to quit? Simply put, it is a written notice served on the tenant setting out the reasons why the landlord is entitled to take possession of the property and demanding that the tenant surrender the premises to the landlord or a listed attorney or agent. It also states the tenant risks being ejected by law if he or she does not run over the property within three days.

How can a notice to quit be served? It has been deemed sufficient to tack the notice up on the tenant’s door as it is assumed that anyone living in the property will easily find it. The notion that process servers have to be hired to track down the tenant and serve him or her with the notice is false.

Landlords sometimes get in trouble by assuming that it is OK to take action if the notice has been served, three days have passed and the tenants remains in possession of the property. That is not true. The law prohibits the use of “self help” to evict tenants, so landlords are prohibited from removing doors, shutting off power or taking other actions designed to run people out of the property.

This column was authored by Ethan C. Nobles and originally appeared in the Aug. 18, 2015, edition of the Daily Record in Little Rock.