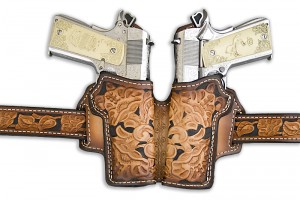 Saline County Sheriff Rodney Wright made news at the first of this month when he effectively said that citizens openly carrying firearms in that county won’t be confronted by deputies unless there is reason to believe they are up to no good.

It is strange that Wright’s position should get so much coverage as he stated back in June that open carry is more or less OK in Saline County. It is odder still that we’re kind of left with the open carry issue to be determined on a county-by-county basis.

Still, open carry has become a hot topic and Wright based his department’s policy on an opinion that state Attorney General Leslie Rutledge at the end of August. In that opinion, she said that someone carrying a weapon openly does not necessarily violate Ark. Code Ann. §5-73-120(a).

That law, modified by Act 746 of 2013, states that a “person commits the offense of carrying a weapon if he or she possesses a handgun, knife, or club on or about his or her person, in a vehicle occupied by him or her, or otherwise readily available for use with a purpose to attempt to unlawfully employ the handgun, knife, or club as a weapon against a person.”

It appears, then, that Rutledge has interpreted that law to mean pretty much what it says on its face. Still, Rutledge points out that there are four things people who choose to carry weapons openly should keep in mind:

Still, it seems clear that choosing to allow open carry or not is up to local officials in a lot of cases. There is still some confusion over the law and policies regarding the controversial topic of open carry will be determined locally until either the Legislature or the Arkansas Supreme Court clarifies the issue once and for all.

At this point, the smart money might be on the state Supreme Court. After all, the Legislature passed Act 746 with the intention of clarifying the issue and managed to just make it muddier. The issue was confused further when former Arkansas Attorney General Dustin McDaniel issued an opinion stating Act 746 did not allow open carry and things got even less clear when Rutledge said the law does allow it.

One of the jobs of the state Supreme Court is to clarify laws. This is one of those cases where the court clearly needs to step in, make a decision on the open carry issue and determine whether that is allowed in Arkansas or not.

This column was authored by Ethan C. Nobles and originally appeared in the Sept. 15, 2015, edition of the Daily Record in Little Rock.